The Universal Console is a web-based application for controlling a Digitarium® digital planetarium system. It gives presenters more options for operating their system—while still maintaining the ease of use for which Digitalis is well known.

As an example of finer control, with the remote control, there are four preset rates of meteor showers. With the Universal Console, users can choose any meteor shower rate from a continuum and adjust this as desired.

The Universal Console hides absolutely any trace of the user interface from the audience, maximizing the immersive experience. Run a software script, change your latitude/longitude, show images or videos, and more, without your audience seeing a single line of menu text on the dome.

Here is a screenshot of the “Observer” screen, which enables you to adjust your viewpoint, sky time, etc.: 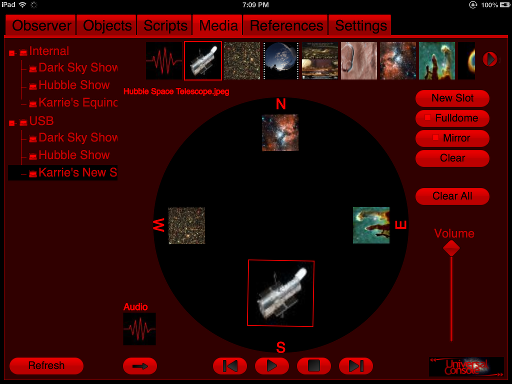 Note that the interface colors help preserve the presenter's dark adapted vision and mitigate light cast on the dome.

To gradually adjust your latitude, longitude, altitude, or heading, simply drag the round handle to the right to increase the value, or the left to decrease the value. The further you move the handle away from the center, the faster the value will change. To enter an exact number, edit the setting with the keyboard (physical or on-screen). The time controls function just like a DVD remote.

The Universal Console currently can be run by an Apple iPad (using the built in Safari web browser) or any computer that runs the Firefox web browser. It is a cross-platform application, so it does not matter which operating system your computer runs.

The Universal Console now supports basic cove light control for Bowen Technovation AstroFX Aurora cove lighting sytems. Fade up or down your cove and adjust the color and intensity—all from your iPad or desktop.

Worried that you won't be able to set up or use the Universal Console? Here are some points to consider:

Receive a discount of $500 when purchased with a new Digitarium system. 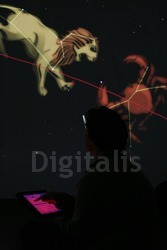